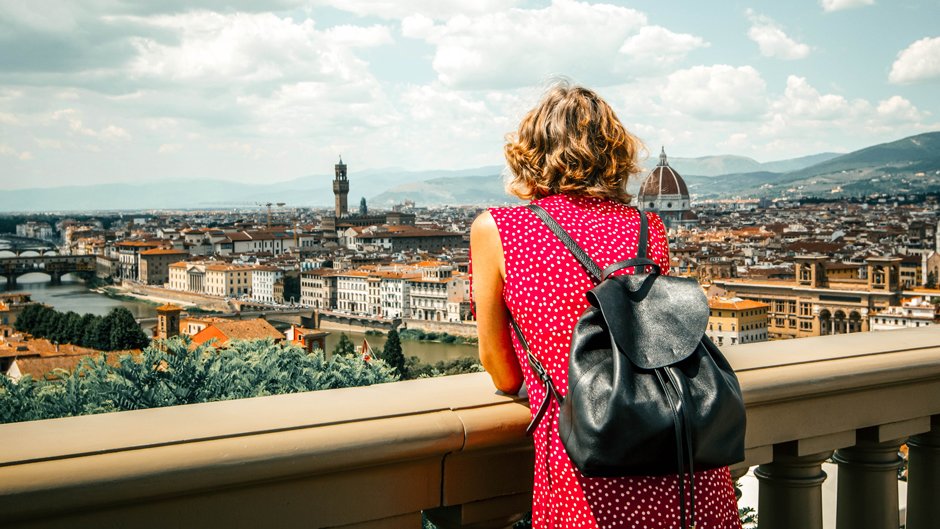 Florence is an exciting city in which to live and study. On an afternoon stroll through the streets of Florence, which is set amidst the golden hills of Tuscany, you can admire the architecture of Giotto and Baroque sculptures adorning the fountains of the city. You can linger in at the Uffizi Gallery with its vast collection of paintings and sculptures, and view the magnificent Santa Croce, where Galileo, Michelangelo, and Machiavelli are buried. Discuss art with Florentine painters in their studios and explore the bookshops near Via Cavour, and visit one of the most popular spots in Florence, the Ponte Vecchio, a 14th-century bridge spanning the River Arno.

This course introduces the social and cultural bases that impact human behavior, social interaction, and life opportunities. Florence offers multiple kinds of material and symbolic cultural experiences that can be made more meaningful through an introductory sociology course. The city has been a strong textile producing center for many centuries, and combined with treasured art and the training home of the national Italian football team, provides a wide range of experiences to explore the history of the city and the development of both material and nonmaterial culture. The Mercato Nuovo (New Market), Piazza della Signoria, Boboli Gardens, and the Uffizi Gallery are all field trip possibilities to explore both material culture and architectural histories as well as observe norms of behavior and how Florentines interact on a daily basis. Florence’s fascist history provides an opportunity to investigate the role of institutions and social movements, particularly in relation to modern anti-fascist activism.

This course provides a prime opportunity to look at current issues and events that are occurring Spring 2020 in Italy. Florence is an excellent place to explore the rhetoric around immigration and how various local and regional media outlets, including the local English newspaper The Florentine, frame these issues. The course will also look at inequality issues, especially as they relate to social movements and social change. Fortunately, Florence is home to COSMOS, the Centre for Social Movement studies which supports sociological (and other disciplinary) research on social movements and hosts many talks and events. A recent workshop, for example, explored the intersections of art, protest, politics, and social media. Guest speakers from the center and visits to the center itself will offer students a better understanding of social change in the region. Course field trips and social movement study will also include connecting with a local makerspace or FabLab to explore how tools and technology and the creative process of making relate to social change.

Florence provides an exciting opportunity to explore popular culture and to think critically about similarities and differences with the U.S. This course looks at relationships between contemporary popular culture, social institutions and collective behavior within the historical context of social, political, and economic changes. Florentine subcultures span from a vibrant punk scene to opera and students will explore this range of popular culture through fieldtrips and research on these diverse locations of cultural expression. Football/soccer/hockey/rugby all have origins in the uniquely Florentine game of calcio storico – a gritty, aggressive game of goal making and defending – and when paired with the Fiorentina Football Club these two athletic subcultures make this city ripe for exploring the love and connection to this aspect of popular culture. It is also a source and site for cultural representations of all sorts in advertising and film, but especially in the popular street art on Via Degli Alfani or in the public art of Clet. The comparison and contrast of street art and other popular sub and counter cultures in Florence with similar scenes in the U.S. will be an essential part of this popular culture class.

ENGL 123: Critical Thinking Composition and Literature (3 units )
Prerequisite: ENGL 122 or equivalent
ENGL 123 is a continuation of ENGL 122 emphasizing the study of poetry, fiction, and drama. The course is designed to encourage continued improvement in essay composition through a focus on critical thinking about literary works. The course will increase understanding of the creation of aesthetic meaning and the use of symbolic forms in language and thought; and introduce students to several literary genres in the context of culture.

ENGL 150: Introduction to Literature (3 units)
Recommended: ENGL 122 or equivalent
This course introduces students to the academic study of literature through representative works within the major genres reflecting a variety of cultures and experiences. The course covers the distinguishing elements of each literary form and the art and practice of literary analysis, and exposes students to the historical, philosophical, social, political, and/or aesthetic contexts relevant to selected texts.

ENGL 222: Creative Writing (3 units)
Prerequisite: Eligibility for ENGL-122 or equivalent
In this course, students read in different genres--primarily fiction and poetry in order to learn various writing techniques, styles, and conventions. This study leads to the composition of original poems and short prose pieces that students workshop in class, focusing on the revision and editing process. C-ID ENGL 200, CSU, UC

POLS 1: Intro to US Politics (3 Units)
Recommended Preparation: Eligibility for ENGL 1A.
In Florence we will have a unique opportunity to examine the workings of the U.S. government from the vantage point of Europe. We will also compare the features of the U.S. governing system with Italy’s political system where appropriate. In this class, we will examine the interplay among the U.S. government’s main political institutions and evaluate how this influences the ability of the public to control policy and the country's ability to respond to pressing economic and social problems, especially with respect to food policies.

POLS 25: Intro to International Relations (3 Units)
Recommended Preparation: Eligibility for ENGL 1A or equivalent
How are countries facing the challenges of climate change, mass migrations, and international trade? In this course we’ll explore these and other international issues through lectures, films, role playing exercises, and simulations. We begin the course by defining international relations and looking at some of the analytical tools, concepts, and theories IR scholars use to study the behavior of states in the international system. In the second half of the course, our class will assume the role of the Italian government in an online international negotiation in which you will work with other countries to formulate global solutions to current environmental, human rights, and security issues. There will be two live summits (online) which may take place outside scheduled class time.

ANTH 125: Physical Anthropology (3 Units)
This course is an introduction to the science of Physical Anthropology. Topics to be covered will include: the field of anthropology; the scientific method; genetics and inheritance; natural selection; principles and mechanics of evolution; evidence of evolution; modern human variation; living primates; and the fossil evidence for human evolution. No student of Anthropology can ignore the importance of biological classification to the development of evolutionary thought, and Florence is where biological classification was first conceived. Even before Linnaeus outlined the kingdoms and orders we use today, the herbarium at the Botanical Museum at the University of Florence established the first rules for biological classification in 1563, and it’s still open to students! We’ll visit La Specola, one of the first science museums in Europe that has many animals stuffed that are now extinct. A great collection of the amount of diversity within species found around the world. This special museum also exhibits wax models of some of the first dissections of the human body. One of my favorite museums in the world is the History of Science Museum, which houses the telescope that Galileo used to reframe the trajectory of modern scientific thought. And we’ll have the opportunity to see that telescope!

ANTH 110: Cultural Anthropology (3 Units)
The birthplace of Humanism, Florence is the ideal place to vest our studies of Cultural Anthropology. The National Museum of Anthropology & Ethnology is one of the most important anthropology museums in all of Europe. We will use our everyday experiences of living in Florence as examples to illustrate class concepts and process experiences. This course is an introduction to the various customs, traditions, and forms of social organizations in both Western and non-Western societies, in which Italian culture will be the focus. Multicultural perspectives are examined for such topics including subsistence methods, belief and religious systems, linguistics, arts, kinship systems, marriage and family systems, technology, war, politics, and changes due to internal and external forces.

ANTH 200: Ethnographic Film (3 Units)
Introduction to the use of film by anthropologists as a research tool. Students view and evaluate a series of films depicting different cultures from around the world made by anthropologists, with a focus on Italian Cinema and Italian film makers. The neorealism movement with its birth in Italy, and Italian filmmaker contributions to Visual Anthropology will set the foundation of the course. We will also take a field trip to the local theater, and compare this experience to home.

Diane Carlson has enjoyed ten years of teaching sociology at Folsom Lake College. While she started off early on as a music major, life events pushed her to leave college and hitch hike around Europe, Egypt, Israel, and Turkey. Her experiences transformed her world and she eventually went back to school and discovered sociology and its valuable tools for analyzing and understanding many aspects of her experiences. After obtaining a BA from the University of Arizona in Sociology, she continued on to get a JD from the UA College of Law. Not satisfied with the inequitable and unjust ways she saw the law applied, she went back to graduate school in sociology to learn more about gender inequality and racism and ended up with a summer internship with the Institute for Gender Studies at the University of South Africa in Pretoria and an MA from UC Davis. Although teaching is rewarding, Diane’s need to understand more about social justice and equity issues in education led her to her Doctorate in Education from CSUS in 2014.

Meanwhile, Diane has taken advantage of every opportunity to travel that she can. These opportunities have included China, Thailand, Vietnam, and Cambodia, as well as Peru, Mexico, Belize, Honduras, Nicaragua, Guatemala, and various parts of Europe. She returned to South Africa in 2017 to reacquaint herself with the changes the country had experienced in the 17 years since she had been there. Although Diane has been fortunate to travel extensively with her family, it’s still that first time of rambling around Europe and the eastern Mediterranean that taught some of the most significant lessons about what it is like to be far from home on a learning adventure. Travel can be intense, magnificent, challenging, and transformative, and Diane is excited to share how sociology can help unravel and illuminate those experiences.